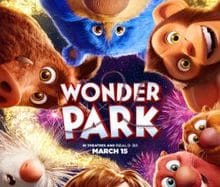 June is a girl with an overflowing imagination, who likes to create imaginary, magical amusement parks. She draws them, imagines them, but … can an amusement park created with imagination become reality? This optimistic and imaginative girl will be the creator of a park where she will live amazing adventures with the blue bear Boomer, the Greta boar, the beavers Gus and Cooper, the chimpanzee Peanut and the Stevens porcupine.
New animated adventure comedy from Paramount Pictures and Nickelodeon Movies developed by the Spanish animation studio Ilion Animation Studios, creators of the films Planet 51 (2009) and Mortadelo and Filemón against Jimmy el Cachondo (2014). The original version of the film features the voices of Jennifer Garner (Men, women & children, Dallas Buyers Club), Mila Kunis (Third person, Oz, a fantasy world), Jeffrey Tambor (Archer, Arrested Development), Ken Jeong (Infiltrated in Miami, Community), Kenan Thompson (A blow with style, The Awesomes) and Matthew Broderick (The exception to the rule, Manchester in front of the sea).