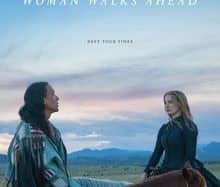 The film is inspired by the happenings that happened in reality and tells the story of Catherine, a widow from New York who in the 1880s traveled alone in North Dakota to paint a portrait of a tribe leader Sitting Bull. Her arrival at Standing Rock is welcomed with hostility by an American Army officer who has troops stationed around the Lakota Reserve to prevent the Native Americans from claiming their land. When Catherine and Sitting Bull become closer, and friendship and even their lives are jeopardized by threatening government forces, Catherine must face the violence that threatens her position.