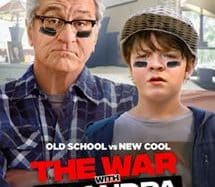 The War with Grandpa

Peter is a child who is forced to leave his room because his recently widowed grandfather moves there. In this way, the child sees the only option to resume his room to declare war on his grandfather.
Tim Hill (SpongeBob, The Life of Rocko) will direct this adaptation of the children’s book of the same name written by Robert Kimmel Smith which will star Robert de Niro (One of Ours, The Godfather: Part II). In addition, Lisa Addario, Tom J. Astle, Matt Ember and Joe Syracuse will be in charge of the script.