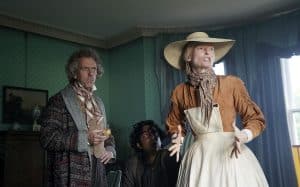 The Personal History Of David Copperfield

David Copperfield is a boy who is abandoned by his stepfather after his mother’s death. However, the boy does his best to show that he has what it takes to succeed. Set in 1840, David travels a world that tries to push him away while he looks for a hole to fit in. From his sad childhood to the discovery of his talent as a writer, the young man’s journey is marked by fun and tragic.
Director Armando Iannucci (The Death of Stalin, Veep) is heading this new adaptation of the Charles Dickens classic, starring Dev Patel (Hotel Mumbai, Lion), Tilda Swinton (Isle of Dogs, Suspiria), Hugh Laurie (Holmes & Watson, Chance) and Gwendoline Christie (Game of Thrones, Welcome to Marwen).