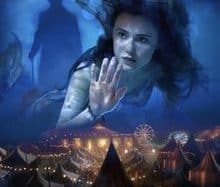 The sick Elle lives with her unbeatable uncle since her parents died. She has a disease that no doctor can diagnose, but she is kept up with her morale above her childish faith in sirens and other fanciful creatures. Cam is a reporter who is sent by his editor in Mississippi to investigate certain claims about a “magic healing elixir,” and Elle follows him closely. This elixir that the locals swear to cure whatever seems to be the water in which a siren named Elizabeth is. A “real” siren, Elle insists, to exasperate her uncle’s more rational.