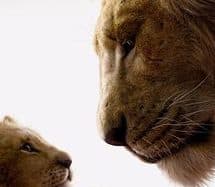 Real action version of the 1994 Disney animation classic. The story follows the life of little Simba, a lion cub who lives happily in the savanna with the rest of his family. His father Mufasa is the leader of the pack, something that does not stop accepting his brother Scar, who will try by all means to get rid of him. It will be then when Simba will have to flee and leave his home to enter new and terrifying places.
During his new solo adventure, Timón and Pumbaa, a meerkat and a warthog, respectively, will cross paths, which will make the life of the little lion come back to make sense. However, the present will come to remind Simba who he truly is and where he comes from.
The ‘remake’ of the animated film The Lion King (1994) is directed by Jon Favreau (The Jungle Book, Iron Man) and features a screenplay by Jeff Nathanson (Pirates of the Caribbean: Salazar’s Revenge). In the cast of lead voices features the actors Donald Glover (Spider-Man: Homecoming) as Simba, James Earl Jones (Rogue One: A Star Wars story) as Mufasa, Seth Rogen (Damned neighbors 2) in the role of Pumba , Billy Eichner (American Horror Story) as Timon, Chiwetel Ejiofor (Mary Magdalene) in the role of Scar, John Oliver (Decline of the American Empire) as Zazu, Alfre Woodard (Luke Cage) as Sarabi, Florence Kasumba (Black Panther) as Shenzi, Keegan-Michael Key (did it have to be him?) as Kamari, John Kani (Captain America: Civil War) as the wise Rafiki, in addition to the singer Beyoncé as Nala.