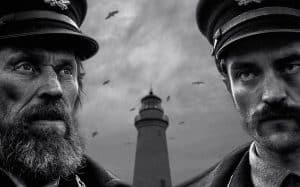 A remote and mysterious island of New England in the 1890s. Veteran waiter Thomas Wake (Willem Dafoe) and his young assistant Ephraim Winslow (Robert Pattinson) must live together for four weeks. Your goal will be to keep the lighthouse in good condition until the relay arrives that allows them to return to land. But things get complicated when conflicts arise because of hierarchies of power between them. This horror and fantasy drama is directed by Robert Eggers, responsible for The Witch: A Legend of New England (2015).

We are in the new era of folk horror, and in cinema this is due to two directors, Robert Eggers and Ari Aster. The second one was held in 2018 by Hereditary and after twelve months Midsommar was ready, the most significant film of this trend of ancestral terror linked to folklore and atavistic rites. Eggers has gone with more temptation. He appeared with his first film, The Witch, directed in 2015, and it has taken four years to shape the second, The Lighthouse, in which he rethinks some notions of this reborn folk horror playing, as the canons of the trend command, with the landscape (here an island, a lighthouse), the unfathomable fears and the most mysterious gestures and decisions.