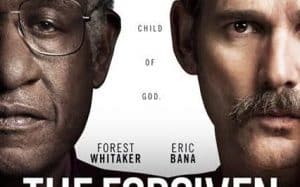 It is the year 1993. Archbishop Desmond Tutu is called in the cell of one of the most dangerous criminals, Piet Bloomfeld who asked for his presence in the desire to be forgiven for the crimes he committed in his troubled past. Saying that the detainee’s actions are too serious to be forgiven by the authorities, Tutu gives Piet a chance to record a detailed confession designed to bring relief to the families he has destroyed. He initially refuses but eventually Piet accepts Tutu’s proposal.