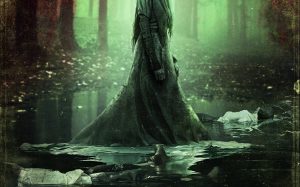 The Curse of La Llorona

La Llorona. The woman who cries. A terrifying appearance, enclosed between Heaven and Hell. The mere mention of his name has aroused terror around the world for generations. His tears are eternal, and lethal, and those who hear his death call at night are condemned.
Ignoring the chilling warning of a mother about the danger her children might face, a social worker (Linda Cardellini) with two small children will suffer strange supernatural events. Your only hope will be to escape the curse of La Llorona. On the margins where fear and faith collide, they will have to survive their deadly scream, whose lurking in the dark will not stop.
Inspired by the famous Mexican legend known as La Llorona, this horror movie is produced by James Wan (The Nun, Insidious: The Last Key) and marks the debut feature film by Michael Chaves. Starring Linda Cardellini (The Founder), Patricia Velasquez (American Family), Sean Patrick Thomas (Barbershop: Everyone Needs a Cut) and Raymond Cruz (Better Call Saul).