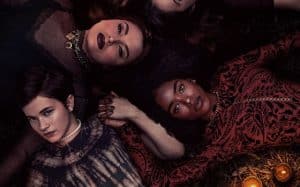 This sequel to Young Witches takes place 20 years after the original film. Lily (Cailee Spaeny), the protagonist, is a teenager who moves into the house of her mother’s new partner. Her change of residence, in addition to living with a stepfather and three stepbrothers, means becoming the new girl at the institute. And what’s worse: at the center of the teasing of one of the popular kids in the class. However, her luck changes when three companions invite her to join their group. Her new friends will show her that, like them, she is a witch and will initiate her into the world of magic. Lily is, in fact, the fourth member of the coven who were waiting so eagerly to be able to successfully carry out their spells.
Although at first everything is a kind of game to give a reprimand to those who laugh at them in high school, little by little everything becomes dangerous. A dramatic event and a secret about Lily’s past will turn everything against her and their paths diverge. However, a dangerous threat stalks the protagonist and the only way to defeat her is to be together again. Will Lily be able to accept her past and what it entails?