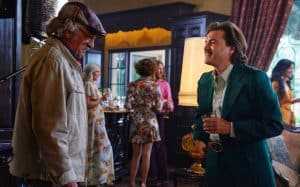 Max Barber (Robert De Niro) is a Hollywood film producer of B-movies who, after the failure of his last film, has an outstanding debt with the head of the local mafia (Morgan Freeman). Thus, he decides to undertake a new project producing a film with high-risk action scenes, with the aim of causing the death of the main actor to collect the insurance. Duke Montana (Tommy Lee Jones), a depressed old star who has given in to drinking, will be the ideal actor to carry out Max’s scam. However, the days of filming are passing and, despite Max facing Duke with very dangerous challenges, he fails to carry out his initial plan. But, paradoxically, as the actor survives scene after scene, Max is shooting the best film of his career.
This film, directed by George Gallo, is a remake of the 1982 Harry Hurwitz film of the same name.