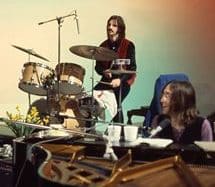 The Beatles- Get Back

This documentary about the popular Liverpool band, shows unpublished material on the recording of the album Let It Be. The film includes intimate images of the group in which John Lennon, Paul McCartney, George Harrison and Ringo Starr can be seen working in the studio and joking with each other. In addition, the film also features additional images of the iconic performance on the roof of Apple’s offices. During the 42 minutes of this impromptu concert, which was their last performance as a group, you can see the interactions between the members of the band and the reactions of the public. A movie created from hundreds of hours of footage, directed by Oscar-winning Peter Jackson.