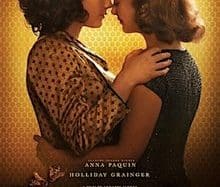 Tell It To The Bees

Scotland, in the 50s. Dr. Jean Markham (Anna Paquin) returns to the small town she left as a teenager to take care of her late father’s medical consultation. When little Charlie (Gregor Selkirk) has a fight in the schoolyard and goes to his office, she invites him to visit the hives in his garden and encourages him to tell his secrets to the bees, as she did as a child. The new friendship between the boy and the doctor takes his mother Lydia (Holliday Grainger) to Jean’s world. Unexpectedly the two women are attracted in a way they would never have imagined. But this secret between the two cannot remain hidden forever.
Adaptation of the homonymous novel by Fiona Shaw directed by Annabel Jankel (Skellig, Dead on arrival) and starring Anna Paquin (The Affair, True Blood) and Holliday Grainger (Patrick Melrose, The decisive hour). Complete the cast Kate Dickie (Game of Thrones), Emun Elliot (Star Wars: Episode VII – The Force Awakens) and the young actor Gregor Selkirk.