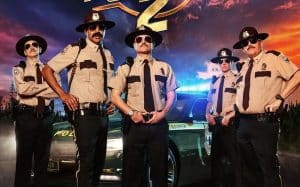 Former rookie from the super-police group, Rabbit, dreams that he and his police friends – a group that fell inexplicably in disgrace – are rock stars and the bus they travel with in the tournament had an accident. This nightmare is repeated to Rabbit, but he does not say anything about it. Although now they have taken on other career paths, the police group gets the opportunity to return to work in an area on the border between America and Canada that the latter has agreed to give away. But locals are not at all delighted with the idea of becoming overnight from American Canadians.