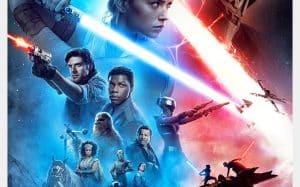 Star Wars: The Rise of Skywalker

Last chapter of the third trilogy of the Star Wars franchise. In this ninth installment of the galactic saga, the story comes to an end with an epic and amazing journey to a galaxy far, far away. The Resistance is under minimum, but in its fight without rest it has contacted allies throughout the galaxy to create a network powerful enough to destroy the First Order. This will be the final showdown between Rey (Daisy Ridley) and Kylo Ren (Adam Driver). New legends will be born and the final battle for freedom is about to arrive.

When we talk about Star Wars, and specifically when we do it as a primeval blockbuster, a phenomenon that in the late 70s changed Hollywood forever, we usually forget that Star Wars was originally author cinema. A very risky, radical author’s cinema, which was abandoned in a kamikaze way to the spectator’s complicity with the hope that it would endure the first twenty minutes of two robots walking through the desert, and a first hour without Han Solo showing the blaster. If the viewer entered there, he would stay forever, and George Lucas knew it. That is why he insisted so much on monopolizing merchandising benefits, but also why he wanted the saga to remain in his hands when he premiered the prequels, and these also proved to be so his, so free, that it took us years to understand his failures and successes with true justice.