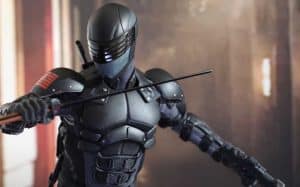 Action film based on the well-known line of toys G.I. Joe. This spin-off focuses on the story of the origins of Snake Eyes (Henry Golding), the silent ninja always dressed in black and whose face is unknown, and how he tries to become a member of the Arashikage clan. Along with him we will meet other characters such as The Baroness (Úrsula Corberó) and her arch-enemy Storm Shadow (Andrew Koji).