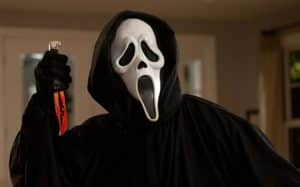 Fifth installment of the Scream saga. In principle, it was planned that it would be made by the North American director and father of the franchise, Wes Craven, but his death on August 30, 2015 put production on hold. Craven, a victim of a brain tumor, had openly shown his interest in continuing to release films in the saga.
Today the project is on hold, and Bob Weinstein, co-director of Weinstein CO. He assured that there would be no fifth part of the saga, and that the story would have to continue in the series, which has been able to see the light successfully. Broadcast on MTV, it is titled the same as the first installment, Scream, and has managed to revolutionize fans of film panic.
The murderer Ghostface is also a protagonist on the small screen thanks to the fact that the American network has managed to adapt the four Kevin Williamson films, which went on to gross 500 million dollars worldwide. The series was created by Bob and Harvey Weinstein and stars Willa Fitzgerald, Bex Taylor-Klaus and Carlson Young. After its triumphant premiere, on June 30, 2015, MTV chose to renew for a second season.