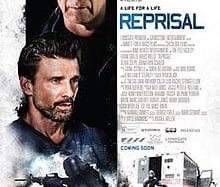 Jacob is a bank manager troubled by a violent event in which he was involved some time ago when a group of bank robbers rushed over him and broke the life of one of his colleagues, so he decides to ally with his neighbor, a former cop, James, in an attempt to find the attackers and make him pay very cruel for the wrongdoing. While thinking about how to understand the next move, Gabriel, this highly trained criminal always manages to stay one step ahead of them. When Gabriel kidnaps Jacob’s wife and daughter, he begins a bloody war to recover and brings all three men to the climax.