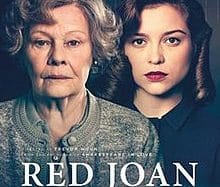 It is the year 2000 and Joan Stanley (Judi Dench) enjoys his retirement in a residential neighborhood during the turn of the millennium. Her peaceful life is suddenly disrupted when she is arrested by MI5, the British Intelligence Service, accused of providing information to communist Russia, and for being the longest-serving spy of the KGB in British territory.
We went to 1938, when Joan (Sophie Cookson) is a physics student in Cambridge who falls in love with Leo Galich (Tom Hughes), a young communist who makes him change his perception of the world. While working in a secret nuclear laboratory during World War II, Joan comes to the conclusion that the world is on the verge of a guaranteed destruction. Joan must then choose between betraying her country and her loved ones or trying to save them.
Film based on the life of the spy Melita Norwood, who directs Trevor Nunn (Night of Kings or whatever you want) and has a script by Linday Shapero (The Head Hunter). The film is starring Judi Dench (Murder on the Orient Express), Sophie Cookson (Kingsman: The Golden Circle), Tom Hughes (A Matter of Time), Ben Miles (The Crown) and Kevin Fuller (Luther).