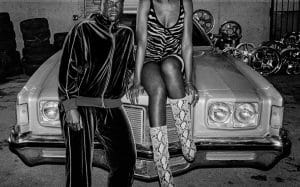 Slim (Daniel Kaluuya) and Queen (Jodie Turner-Smith) have their first date in a desert restaurant late at night. Everything is apparently normal, with playful jokes about what the rest of the night will hold for them, until the couple is arrested by a police officer for a traffic violation. When the officer points his gun at the two young African-Americans, the situation will intensify, and suddenly everything will end dramatically, when the young man shoots the police in self-defense. United by the tragic accident, the couple of fugitives will flee the scene, starting a trip across the country. But everything gets complicated when a video of the incident goes viral and both involuntarily become symbols of terror, pain and trauma.
This dramatic thriller, which is the debut in the film by the filmmaker Melina Matsoukas, is based on an original idea by bestselling author James Frey and is scripted by Lena Waithe.