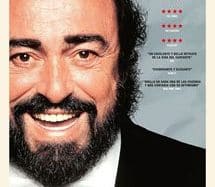 Musical documentary about the Italian tenor Luciano Pavarotti (1935-2007), one of the most famous contemporary singers both in the world of lyric singing and in other musical genres. This film directed by two-time Oscar winner Ron Howard is an intimate portrait of the most beloved opera singer of all time, and includes performances by Pavarotti, unpublished images and the testimony of music personalities such as singer Bono or singer and actress Angela Gheorghiu.