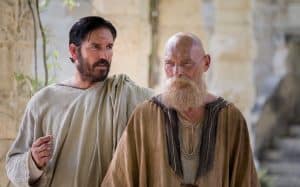 While he finds all the miseries and persecutions borne by the Christian people, Luke believes the only solution remains hope. He is looking for the apostle Paul, he is eager to meet him. Former chant of the followers of Jesus Christ, Paul became his most fervent disciple after a mythical meeting. Charged for the arson of Rome, Paul is now incarcerated by Emperor Nero and is under the control of the Mauritius soldier. Luc asks Paul to write his story. The story of a man who will change the world.