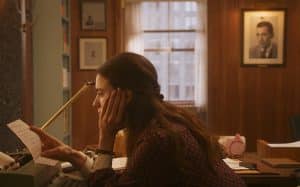 Adaptation of the autobiographical book by the writer Joanna Rakoff, directed and written by Philippe Falardeau (Professor Lazhar). The plot takes place in the late 90’s, when a recent graduate Joanna gets a job in one of the most prestigious literary agencies in New York.
Among other features, the young woman has to respond to letters from fans of renowned writer J.D. Salinger. While she is in charge of their correspondence, a courteous and unusual relationship will be created between the two. The film stars Kristin Scott Thomas (The English Patient) and Margaret Qualley (The Leftlovers series).