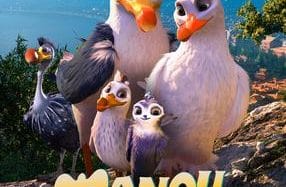 The small and fast Manou grows up believing that he is a seagull like his parents. He struggles to swim, fish and fly like them, but he doesn’t seem very gifted. In the summer race he realizes why. To his great surprise, he discovers that he was adopted and descended from the hated Swift. When, totally disappointed, he leaves his home, Manou will meet other birds on his adventure. And the moment all of them have to face a dangerous threat, Manou will become the hero of the day.
Animation film co-directed by Christian Haas and Andrea Block, visual effects specialists in films such as Independence Day: Counterattack (2016) or Assault on Power (2013). The voice cast of the original version features actors Willem Dafoe (The Florida Project), Kate Winslet (Wonder Wheel) and Josh Keaton (The Young Justice League) as Manou.