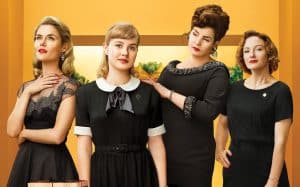 Running the events during the summer of 1959, when the impact of European migration and the rise of women’s freedoms in Australia are about to change the country forever, a shy schoolboy named Lisa engages in a summer vacation at a prestigious Sydney store. There she meets the “black women” who will change their lives forever. Lured and influenced by Magda, the vivacious manager on the luxury floor, and with some colleagues named Patty and Fay, Lisa suddenly sees a world of new possibilities open to him. While Lisa turns from a nerd school into a young optimistic and sophisticated woman, she becomes a catalyst for cultural change in everyone’s life.