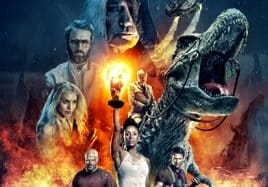 20 years after the events of the first film, the former Nazi moon base became the last refuge of mankind. The earth was devastated by the nuclear wars that made it uninhabitable for humans, but somewhere in the depths of this deserted realm it harbors a power so great that it can save what is left of humanity or destroy it permanently. The truth behind human creation will be revealed when an old enemy leads our heroes on an adventure deep into the earth. In order to save her humanity they will have to fight with Vril, an ancient reptilian who can change their form, and with their army of dinosaurs.