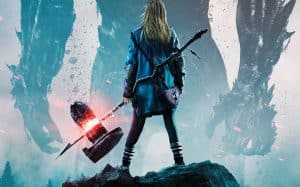 Barbara is a solitary teenager, different from the rest of his younger age, and is in constant conflict with the people in his entourage. His days are about the same, between visits to the psychologist and the director’s office, nothing special happens in his life. Barbara has an obsession for Uriasi, fantastic creatures coming from another world in order to provoke chaos in the world. Armed with its legendary hammer, Barbara embarks on an epic and dangerous fight to prevent Uriasi from taking over the world. Will this succeed?