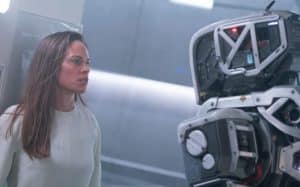 After the extinction of the human race, an android named symbolically “Mother” is responsible for repopulating the planet Earth using a collection of embryos that are stored in a base. Her teenage daughter is enrolled in some courses and is being tested to determine how much she has developed as a human being. When the daughter discovers that there is a mouse inside the base, she begins to suspect that the environment outside the base is no longer contaminated. One day, she sees an injured woman outside the base and decides to let her in. Shortly after that, she will find news that will deeply affect her relationship with her Mother.