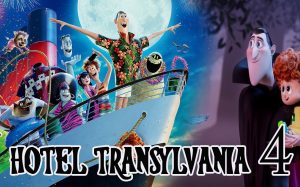 Return Dracula, his daughter Mavis, his human son-in-law Jonathan, as well as his half-vampire, half-human grandson Dennis, along with longtime friends Wayne, Murray, Frankenstein and the invisible man. In addition, in this fourth installment the funniest family of monsters in the cinema grows, after Drac finds his ‘chin’ Ericka.
This animated film is the fourth film in the Hotel Transylvania franchise to once again be based on the characters created by Todd Durham.