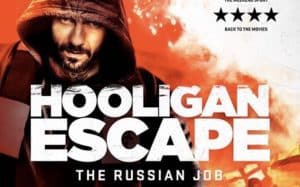 Five UK men, supporters of football teams, were arrested by competent authorities for having entered into violent altercations with more Russian rivals. After being attacked and kidnapped, the five Britons wake up and realize that they were taken from the cells they were thrown in and are now held prisoners in an abandoned warehouse that seems to have no chance of escaping. Someone has thought of revenge and is determined to go to the end to get this revenge regardless of costs or consequences.