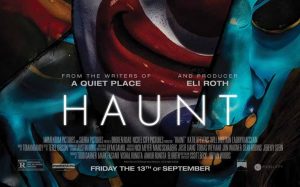 A group of young people decide to spend Halloween going to a haunted house. You will soon realize that the property contains a terrible curse that will test your darkest fears. The night ends up being terrifyingly deadly while the boys realize that some of their nightmares could be real.
Horror movie written and directed by Scott Beck and Bryan Woods, responsible for the films Nightlight (2015) and The Bride Wore Blood (2006). Starring the film Katie Stevens (Polaroid), Will Britain (We all want something), Andrew Caldwell (iZombie) and Lauryn Alisa McClain (Step-Up: High Water). Meanwhile, Eli Roth (Toc Toc, The Green Hell) is one of the producers of the film.