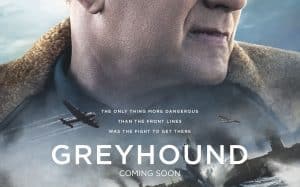 They are the first days of the participation of the United States in World War II. An international convoy of 37 allied ships, led by Commander Ernest Krause (Tom Hanks), is crossing the North Atlantic while submarines lurk on the German side. While facing the enemy, Krause must fight his personal demons to be an effective leader of the allied side.
This war drama, directed by Aaron Schneider, is based on the novel written by C. S. Forester titled The Good Shepherd.