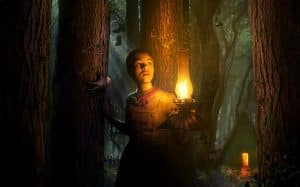 Bavaria, early fourteenth century. Brothers Gretel (Sophia Lillis) and Hansel (Samuel Leakey), 13 and 12 years old respectively, live in utter misery. Also, they lost their father years ago and their mother is now married to a malevolent man. Thus, the couple of children decides to leave what was once their home and flee the town in search of a better life. After crossing the forest, avoiding those people who try to take advantage of them, the two brothers find Holda’s cabin, a friendly woman who decides to take them in. Packed with food and attention, children quickly realize that appearances are deceiving and will have to run away again. But this time to save their lives.
This fantasy and horror film, directed by Oz Perkins, is inspired by the classic tale written by the Grimm brothers.