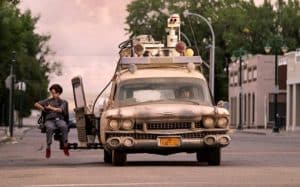 Callie (Carrie Coon) is a single mother who moves to a small town with her two children, Trevor (Finn Wolfhard) and Phoebe (Mckenna Grace). There, in the middle of nowhere, is the farm they have inherited from their grandfather. Soon this family will learn some of the secrets related to themselves and to this place, since the legacy of their grandfather connects with the origins of the Ghostbusters. Together with Mr. Grooberson (Paul Rudd), a seismologist and teacher who has come to the town because mysterious earthquakes have been happening, they will discover a replica of a trap to catch ghosts, something unusual, since ghosts have not been seen in 30 years , since the team formed by Venkman, Stantz, Winston and Spengler became famous in the 80s.
The head of the two original Ghostbusters films, Ivan Reitman, produces this film directed by his son Jason Reitman.