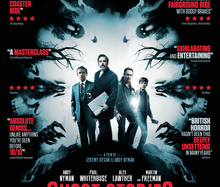 Philip hosts a paranormal theme show that hunts the charlatans who claim to have connections with the spirits or the beyond world, exposing the tricks they use to deceive people. When his hero, Charles, who has mysteriously disappeared from time to time, sends him a letter telling him that he has met three unexplained cases that have shaken his paranormal skepticism, he challenges Philip to try he himself can find logical explanations of what seems impossible to explain. Since then, Philip begins to closely follow these cases and develops a kind of obsession in solving them.