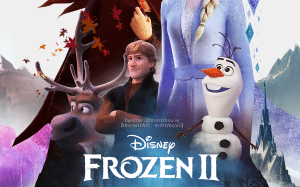 The adventures of the sisters of Arendelle continue. Elsa and Anna, along with Kristoff, reindeer Sven and snowman Olaf, return in this second part of the Disney Frozen animated film: The Ice Kingdom (2013). This time, the kingdom has ceased to be safe since Elsa begins to hear strange voices calling her for answers. A secret of his past will be the key to solving the current problems of the kingdom of Arendelle. Elsa, along with her faithful friends, will enter the unknown and travel through an ancient enchanted forest. Together they set out to find the origin of Elsa’s powers to save his kingdom.
Jennifer Lee (Frozen: The Ice Kingdom) and Chris Buck (Crazy about Surfing) are again in charge of the direction of this sequel. Again, Kristen Bell (The Great Riot (Bad Mothers 2), She is the boss) puts voice to Princess Anna, Idina Menzel (Glee, Ask the Wind) will also lend her voice to the character of Snow Queen Elsa , and Josh Gad (Murder on the Orient Express, Beauty and the Beast) will repeat as the unforgettable Olaf. Robert Lopez and Kristen Anderson-Lopez, composers of the Oscar-winning song Remember Me for the movie Coco (2017), also return to write the songs for this animated film.