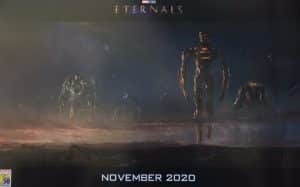 Millions of years ago, cosmic beings known as the Celestials began experimenting genetically with humans. His intention was to create superpowered individuals who would do only good, but something went wrong and the Deviants appeared, destroying and creating chaos as they passed. Both races have clashed in an eternal power struggle throughout history. In the midst of this war, Ikaris (Richard Madden) and Sersi (Gemma Chan) will try to live their own love story.
This movie is based on Marvel comics created by Jack Kirby.