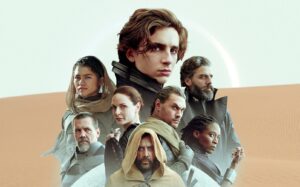 The film takes us back to the planet Arrakis, just after the point at which the story had ended: at the moment when Paul Atreides (Timothée Chalamet) joins forces with the nomadic warriors Freman (Javier Bardem), after defeating in Duel one of your bravest warriors. The film begins at the same point as the second volume of the saga written by the novelist Frank Herbert.