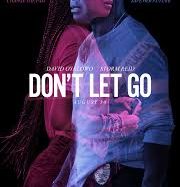 Detective Jack Radcliff (David Oyelowo) receives the worst possible news: his whole family has died, presumably at the hands of a murderer. Mysteriously, the agent receives a phone call from one of the victims: his niece Ashley (Storm Reid). Jack doesn’t know if she’s a ghost or if he’s going crazy. It will be then when he decides to undertake a dangerous race against the clock in which he will end up having experiences with time travel, which will make him discover the truth and rewrite history.