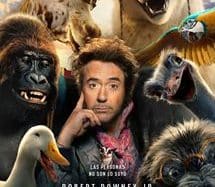 The famous and eccentric Dr. Dolittle (Robert Downey Jr.) is a veterinarian from Victorian England. Isolated in his mansion, Dolittle lives with his exotic animals, which are his only company. But when young Queen Victoria (Jessie Buckley) falls seriously ill, this peculiar doctor will have to travel to a mythical island in search of a cure. Despite himself, Dolittle will abandon his hermit life to embark on an epic adventure, in which he will gradually recover his sense of humor and courage, as he meets old adversaries and discovers wonderful creatures. On his trip he will be accompanied by his young assistant Tommy (Harry Collett), in addition to a whole retinue of various animals. This family comedy is based on the classic children’s literature created by Hugh John Lofting.

He turns the Eddy Murphy saga a thousand times. It has adventures, some comedy and a good story that makes you can’t move from the couch. I hope this movie is the beginning of a trilogy. The story begins by telling how Doctor Dolittel and his wife embarked on adventures all over the world, until in one of those adventures she died and decided to lock herself in her mansion no matter what It will happen in the world. One day a young man went out to hunt with his father and hurt a squirrel, took charge of conscience and listened to how a parrot spoke, this took him to the Dolittel house and there a girl presented what the adventure of the movie would be . Save the Queen of England from death by finding the tree of Eden. An adventure that will take you to face each other with people from the past and where the kid will learn animal language