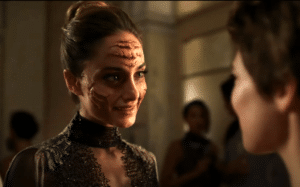 Crimes Of The Future

Science fiction film that takes us to a not too distant future in which humanity learns to adapt to its synthetic environment. This evolution takes humans beyond their natural state and into a metamorphosis that alters their biological makeup. While some embrace the limitless potential of transhumanism, others are wary of its consequences.
Saul Tenser is an artist who has embraced this new state, sprouting new and unexpected organs in his body. Along with his partner Caprice, Tenser has turned the removal of these organs into a show for his loyal fans to marvel at his performances. But, with the government and a strange subculture hot on his heels, Tenser is forced to consider what would be his most shocking performance yet.