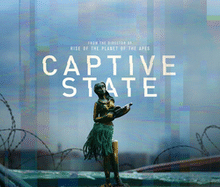 An alien invasion creates chaos on the planet, and these invaders take control of the Earth, imposing their will and their own laws. Certain areas of the big cities have been closed and declared “Closed Areas”, and people are forced to work there to extract valuable ore that aliens want to use. Nine years after the invasion, some areas of Chicago became closed areas. In the Lower West Side of the city, Gabriel works at a data center where the contents of some memory cards and hard drives are uploaded to an alien server in order to conduct a series of research.