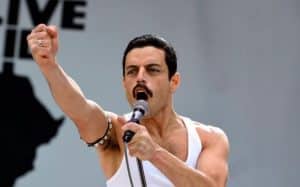 The film is a celebration of Queen’s music band, the music they produced and their extraordinary soloist Freddie Mercury. Freddie defied any stereotype and became one of the most beloved artists on the planet. The film shows the rapid rise of the band through their unforgettable songs and their revolutionary sound. They have reached a hard-to-hit success, but an unexpected turn in Freddie’s life, surrounded by dark influences, makes him quit the band in an attempt to launch a solo career. Lost in the absence of the band, Freddie meets up with his former colleagues for Live Aid.