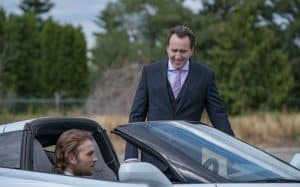 A Score to Settle

After being diagnosed with terminal illness, Frankie Carver, a former collaborator of some local mafia, is released from prison where he spent the last 19 years of his life because of a conviction he has been traded. Having a short period of time until he dies, Frankie desperately tries to get close to his son who he left behind because of a prison sentence and a plan of revenge. He is trying to track down his former co-workers to make them pay one by one for the harm done to him.