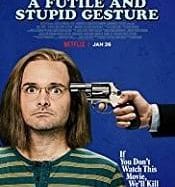 A Futile and Stupid Gesture

Adapted from a book with the same title, the film presents the true story of two Harvard graduates who set up a satire magazine that has become one of the most popular magazines in America and has started a real national hysteria. The beginning was humble and difficult, but success came quickly and somewhat unexpectedly, and the main artisan of this magazine was Douglas Kenney, a man as brilliant as he was so troubled. Despite the fact that he quickly succeeded, Douglas was not fully satisfied and he always wanted to be more successful than he already had, and the feeling of non-fulfillment made him head for drug use.