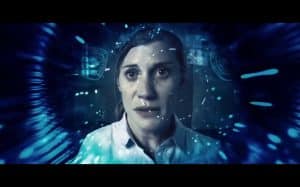 In 2030, a mission on Mars is failing after the crew loses contact with the Earth. No one knows anything about them, everyone thinks they are dead. Six years later, Mackenzie Wilson, a scientist with the mission to control a secret facility run by the United Space Planetary Corporation orbiting the planet. Mackenzie is the daughter of one of the astronauts lost in mission. In this mission is accompanied by A.R.T.I., a system equipped with artificial intelligence. Lena, her sister, starts to suspect something is wrong with Mackenzie.