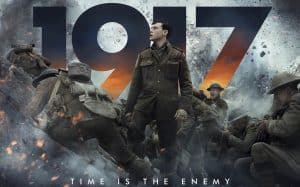 World War I, known at the time as the Great War. On the western front, British General Erinmore (Colin Firth) entrusts the ends of Schofield (George MacKay) and Blake (Dean-Charles Chapman), two young British soldiers, a mission strictly impossible. They must deliver an urgent and decisive message to Colonel MacKenzie (Benedict Cumberbatch). To carry out this mission they must leave the trench in broad daylight and advance through the French countryside occupied by the Germans. Without respite, in a race against the clock, the two soldiers will cross narrow trenches, barbed wire and cross country in an environment of death and destruction, surrounded by corpses of men and animals. They only have a few hours to fulfill their mission and avoid a violent attack at all costs. If they do not arrive on time, 1,600 soldiers will lose their lives, including the brother of one of the two young soldiers.

It is not the first time that Sam Mendes, a filmmaker so given to the allegedly transcendental ombliguism (the old one at the moment of premiere American Beauty) as to the condensation of the essences of a genre via narrative aggrandizement (that Skyfall, the classic of the saga 21st century bond … and perhaps all opus 007) makes the movement a metaphor. Curiously, what in that initiatory adventure of the veteran agent with license to kill was the reason for his endless career after / fleeing the villain on duty and his own past (the return to childhood as a prelude to death) is the leit motiv of 1917, as ambitious at the formal level as of a blunt (and terrible) simplicity in the background: a path of loss of innocence that leads from life to death, and vice versa. The risky (trick in several stages, although that does not matter: from La noose, by Alfred Hitchcoc