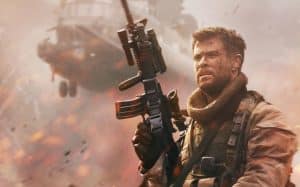 Following the tragic events of September 11, 2001, a team of CIA agents and US special forces is sent to Afghanistan in armed conflict. Captain Mitch Nelson was chosen to complete this dangerous mission. His detention must convince General Rashid Dostum to join them in order to defeat a common enemy, the Taliban and their allies, Al-Quaida. Americans, accustomed to modern technology, are forced to adopt the rudimentary tactics of the Taliban soldiers, to defeat their distrust and fear to cope with this threat.