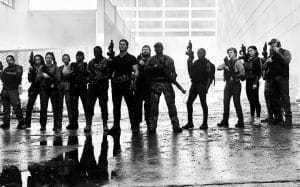 A near future, in which humanity is losing a war against invading aliens. To change course, a group of the best scientists on Earth is preparing soldiers from the past for this fight. A man (Chris Pratt) will then be recruited in this future war, in which the fate of humanity will depend on his ability to face the ghosts of his past.
Chris McKay directs the film with Zach Dean as screenwriter.