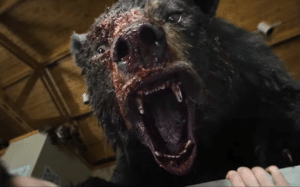 A thriller inspired by real events that occurred in Kentucky in 1985. A bear was found dead of an apparent cocaine overdose among forty open containers containing traces of the drug. The containers had apparently been thrown from a plane by a drug dealer who was convicted of carrying too much weight while skydiving. In the film, the bear is affected by consumption and begins to slaughter people without control.